THE CORPORATION​ examined an institution within society. THE NEW CORPORATION reveals a society now fully remade in the corporation’s image, tracking devastating consequences and also inspiring movements for change.

"The Must-See Documentary Of The Year"

The Globe and Mail

"a particularly impressive act of filmmaking"

"sure to provoke righteous outrage"

"couldn’t be more pertinent to the current moment"

"Manages to see hope for democracy in the years to come" 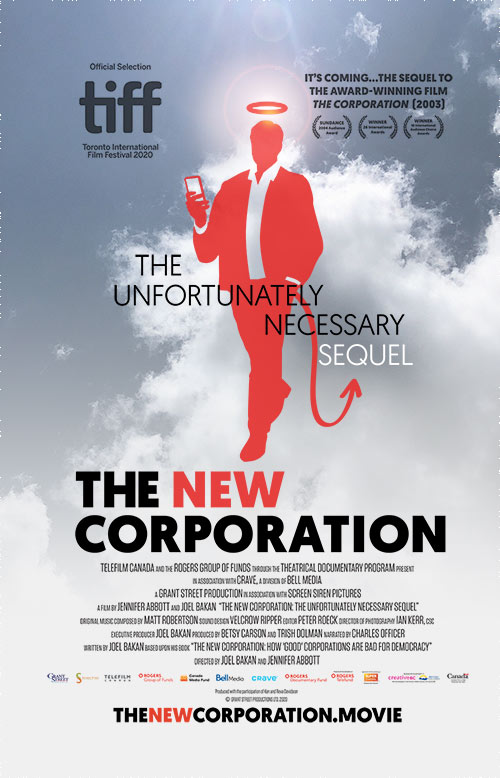 The New Corporation ​reveals how the corporate takeover of society is being justified by the sly rebranding of corporations as socially conscious entities. From gatherings of corporate elites in Davos, to climate change and spiralling inequality; the rise of ultra-right leaders to Covid-19 and racial injustice, the film looks at corporations’ devastating power. Countering this is a groundswell of resistance worldwide as people take to the streets in pursuit of justice and the planet’s future.

Featured in the Film

From two of the filmmakers of the multi-award-winning global hit "The Corporation" comes this hard-hitting and timely sequel. 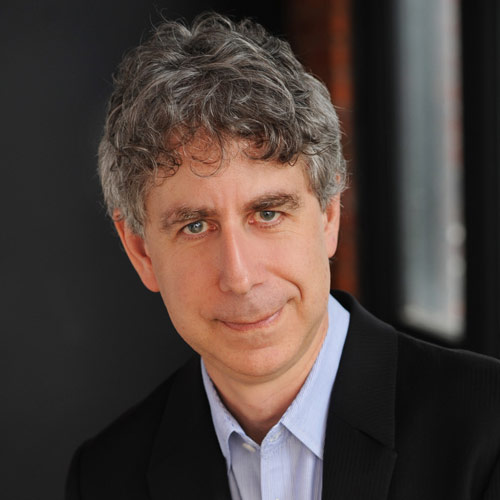 Joel Bakan is professor of law at the University of British Columbia, and an internationally renowned legal scholar and commentator. A former Rhodes Scholar and law clerk to Chief Justice Brian Dickson of the Supreme Court of Canada, Bakan has law degrees from Oxford, Dalhousie, and Harvard.

His critically acclaimed book, The Corporation: The Pathological Pursuit of Profit and Power (2004), electrified readers around the world (it was published in over 20 languages), and became a bestseller in several countries. Bakan wrote and co-created (with Mark Achbar) a feature documentary film, The Corporation, based on the book’s ideas and directed by Achbar and Jennifer Abbott. The film won numerous awards, including best foreign documentary at the Sundance Film Festival, and was a critical and box office success.

The New Corporation, a sequel to that film, is based on Bakan’s book of the same name and directed by Bakan and Jennifer Abbott. Bakan’s scholarly work includes Just Words: Constitutional Rights and Social Wrongs (1997), as well as textbooks, edited collections, and numerous articles in leading legal and social science journals. His award-winning book, Childhood Under Siege: How Big Business Targets Children (2012), has been translated into several languages. A recipient of awards for both writing and teaching, Bakan has worked on landmark legal cases and government policy, and serves regularly as a public speaker and media commentator. Also a professional jazz guitarist, Bakan lives in Vancouver, Canada with his wife Rebecca Jenkins. 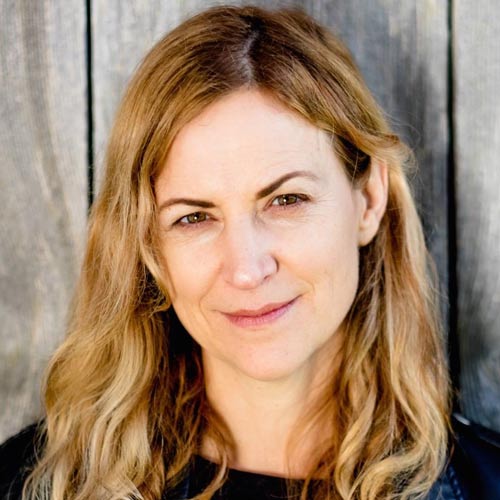 Jennifer Abbott is a Genie and Sundance award winning filmmaker dedicated to filmmaking as art, philosophy and activism. She is best known as the Co-Director and Editor of THE CORPORATION (2003), still the top grossing and most awarded documentary in Canadian history also credited as one of the top ten films to inspire the Occupy movement. In 2020, she released two films:THE MAGNITUDE OF ALL THINGS (Director, Writer, Editor, Sound Designer and Co-Producer) and THE NEW CORPORATION: THE UNFORTUNATELY NECESSARY SEQUEL (Co-Director and Supervising Editor). Since the release of her first short film SKINNED in 1993, exhibited at New York’s Museum of Modern Art, she has been the recipient of 41 filmmaking awards and 17 nominations. While her primary interests lie in writing and directing, Abbott almost always edits and frequently sound-designs her own films. She lives on Canada’s West Coast with her twin teenage daughters. 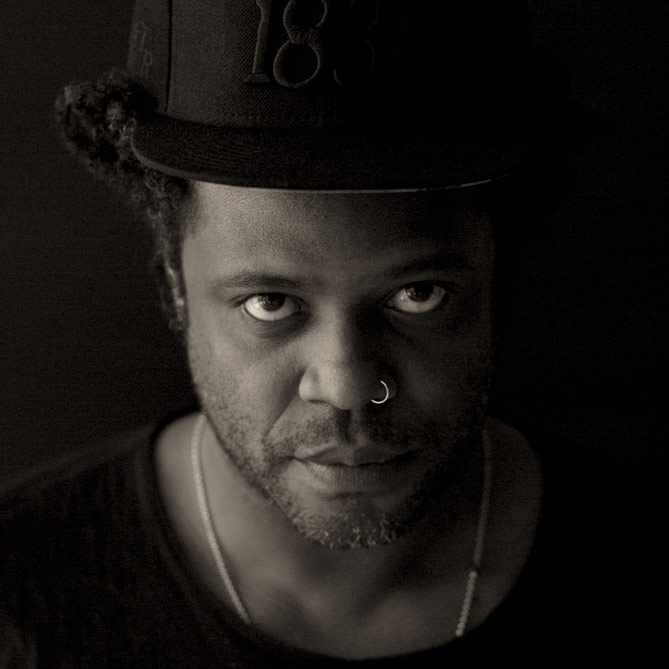 Charles Officer is a Canadian-British filmmaker. A former professional hockey player, Charles studied design at Ontario College of Art and worked as a creative director for major design and advertising agencies. He studied theatre at the Neighbourhood Playhouse in New York City and was a director resident at the Canadian Film Centre where his debut fiction feature Nurse.Fighter.Boy was produced. The film premiered at TIFF in 2008 and earned ten Canadian Screen Award nominations. His feature documentary, Mighty Jerome, produced by the National Film Board is a breathtaking rendering of the rise and fall of Harry Jerome, Canada’s greatest unsung track and field star. The film premiered at Hot Docs 2011, and won multiple awards including a 2012 Emmy Award for Best Historical Documentary.

Charles premiered his second feature-length documentary, Unarmed Verses in 2017 that won Best Canadian Feature Awards at Hot Docs and Vancouver International Film Festival. The film also won the Audience Choice Award at TIFF Top Ten Festival and garnered two 2017 CSA nominations for Best Feature Documentary and Best Cinematography. That same year, he wrote and directed The Skin We’re In, a television documentary that examines anti-black racism through journalist and activist Desmond Cole. The film received a 2017 CSA Donald Britton Award nomination for Best Social Political Documentary. Simultaneously, Charles has been a director on multiple television series such as; Coroner (CBC), Ransom (CBS, Global, TF1), 21 Thunder (Netflix, CBC) and Private Eyes (ION Television, Global). His feature documentary Invisible Essence; The Little Prince is an authorized work about Antoine de Saint-Exupéry’s transcendent novella Le Petit Prince. Released in 2018, the film was sold internationally to Netflix and received two CSA nominations in 2019 for Best Feature Documentary and Best Editing. Akilla’s Escape is Charles’ latest feature set for release in 2020. The crime-noir chronicles the politics of violence featuring acclaimed poet and actor Saul Williams, Chicago born recording artist Vic Mensa, and an original score by Robert Del Naja of Massive Attack. An advocate for creators and the arts, Charles has been a member of the AGO Board of Trustees since 2018. 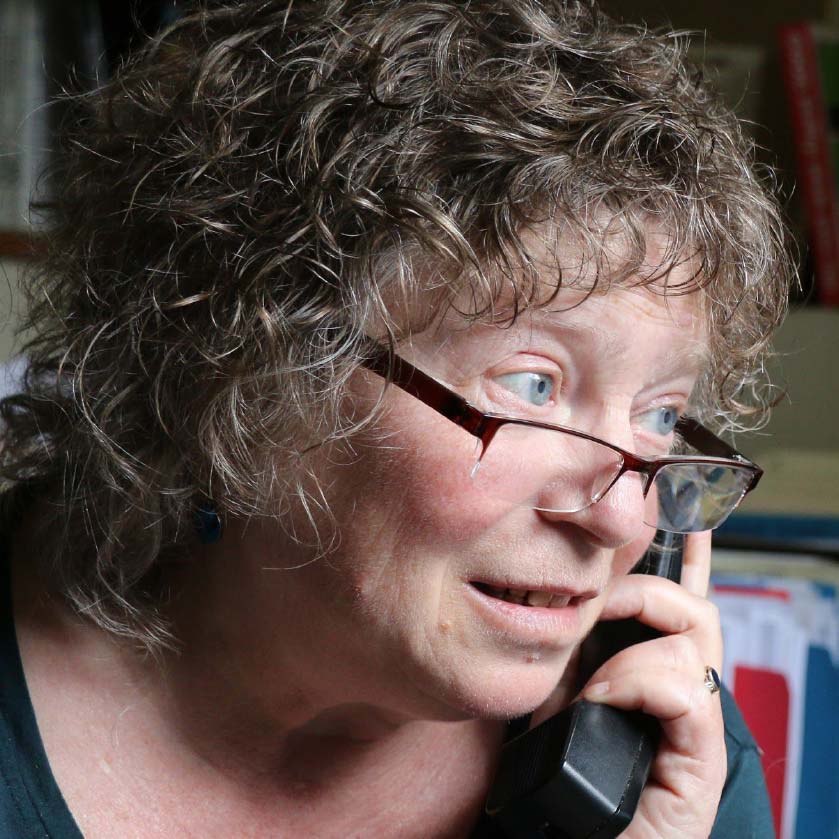 Vancouver-based Betsy Carson is an award-winning producer/ EP/ director with more than 30 years’ experience in documentary film, television, and digital projects. She has collaborated for decades with filmmakers Nettie Wild, Gary Marcuse, Hugh Brody and Mark Achbar, and has produced over 100 hours of innovative projects ranging from television to theatrical features, interactive websites and public art installation.

The films she has collaborated on have won numerous national and international awards and honours including multiple Genie and Gemini awards, AFI, Berlin, Hot Docs, IDA, Prism, Grantham, Planet in Focus. Betsy was also Co-Vice Chair of DOC National for six years. 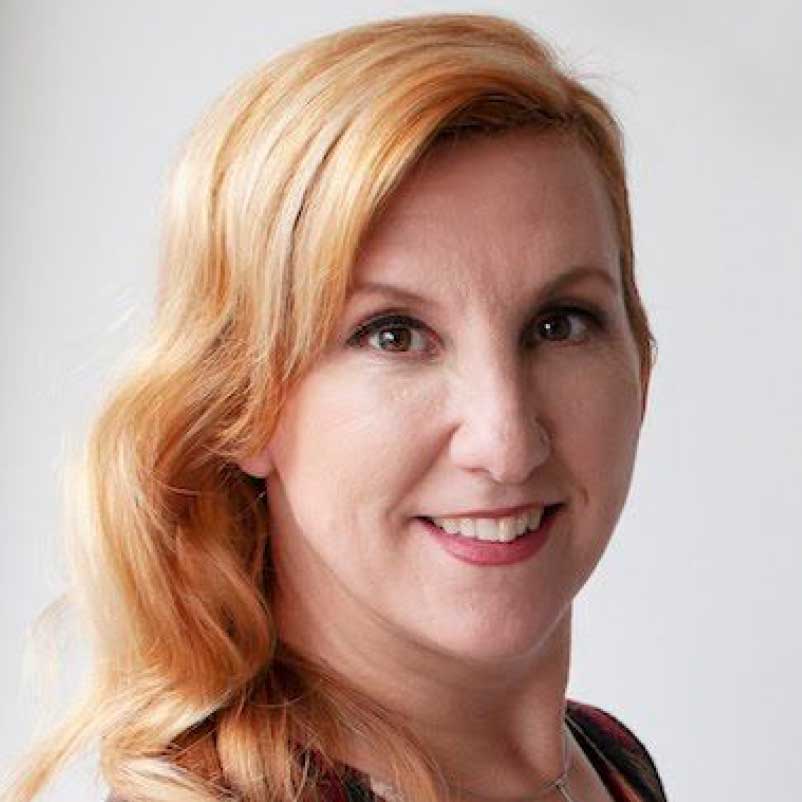 Trish Dolman founded Screen Siren Pictures in 1997 and is a leading Western Canadian feature film, documentary, television, digital producer and director. With more than 30 documentary and feature film credits over her twenty-eight-year career, her projects have won acclaim, awards and have screened at various marquee international festivals.

Trish’s recent credits include: French Exit, a feature film starring Michelle Pfeiffer and Lucas Hedges for Sony Classics and Worldwide (premiere at NYFF 2020); The New Corporation: The Unfortunately Necessary Sequel (premiere at TIFF 2020); Citizen Bio,a feature-length documentary that she directed about the subculture of biohacking (Showtime Networks, fall of 2020); Indian Horse, an adaptation of Richard Wagamese’s award-winning novel, which was the most successful English-Canadian film of 2018: Canada In A Day, where Trish won the Canadian Screen Award for Best Director, Documentary, and was Executive Produced by Ridley Scott and inspired by Kevin Macdonald’s Life in a Day.

In 2003, Trish was the youngest recipient of Women in Film & Video Vancouver’s Woman of the Year Award and received Veuve Clicquot Ponsardin’s La Grande Dame Woman of Distinction. In 2010 she was named one of the 100 Most Influential Women in British Columbia by the Vancouver Sun.

Ian is an Emmy-award winning documentary and commercial director and cinematographer. His projects have taken him from the jungles of New Guinea to the ice floes of Canada’s Arctic to the thin air of the Argentinean Andes at 21,000 feet and beyond. Ian’s passion is telling stories through spectacular images, his work straddling the gulf between fiction and non-fiction, documentary and drama. Ian’s assignments range from meticulously executed national commercials to dynamic, sixteen-camera “reality” projects and month-long arctic and mountaineering expeditions.

Often employing innovative techniques and equipment on his projects, Ian is a certified Cineflex and Steadicam operator and works with a wide range of cameras including Red Epic, Alexa, F55, FS7 and Phantom. He works extensively with motion-control time lapse, remote head, helicopter and drone aerial and stabilized gimbal systems.

Award winning editor Peter Roeck has numerous and diverse credits including the internationally acclaimed feature film Kissed, as well as the feature film documentary Lilith on Top. Other television documentaries include Health Care 911 The Plight of Immigrant Medical Doctors and The Big V. He has been credited on several short form documentaries as well, ranging from promotional stories about the Olympics, the Heart and Stroke Foundation and Vancouver Art Gallery video installation pieces. He was educated at the University of British Columbia and although his love and passion is editing, he also manages his own property development company which brings him close to many of the ideas of Coast Modern.

He works extensively as a musical director for artists such as Björk, Arca, and Anohni, most recently designing the musical playground for Arca’s Mutant;Faith shows at The Shed in New York, and MD’ing for Ellie Goulding’s streaming show from the V&A museum in London.

He has performed at festivals in Europe, North America and Asia, and you can hear his work on several film scores including ‘Steve Jobs’ for composer Daniel Pemberton and ‘The Hunt’ and ‘American Assasin’ for composer Steven Price.. Recent production work has included the Grammy nominated ‘Land of Gold’ for Anoushka Shankar, and synths on the Louise Burns release ‘Portraits’. 2018 saw the release of his third album Entology, from which a track was licenced for the Netflix show ‘The Innocents’.

Velcrow Ripper is well known for his award-winning sound design of such films as The Corporation (Best Sound, Leo Awards) and A Place Called Chiapas (Best Sound, Hot Docs, Leo Awards). A celebrated director as well as designer, Velcrow’s credits include Metamorphosis, and the “Fierce Light Trilogy” of Scared Sacred, winner of the 2005 Genie Award for best feature documentary, Fierce Light: When Spirit Meets Action, and Occupy Love (2013). His first feature-length documentary, Bones of the Forest (1995, co-directed with Heather Frise) won nine awards, including Best of the Festival at Hot Docs and the 1996 Genie for best feature doc.

Global Mechanic is a boutique animation and design studio, founded in 2000. With deep roots in advertising, series television and film, GM is constantly expanding their knowledge and skills in pace with the changing worlds of art and commerce. A collaborative group of designers, developers, producers, filmmakers, and affiliated freelancers from all over the world, their expertise in problem-solving and innovative design has brought many directors with challenging projects to their door.